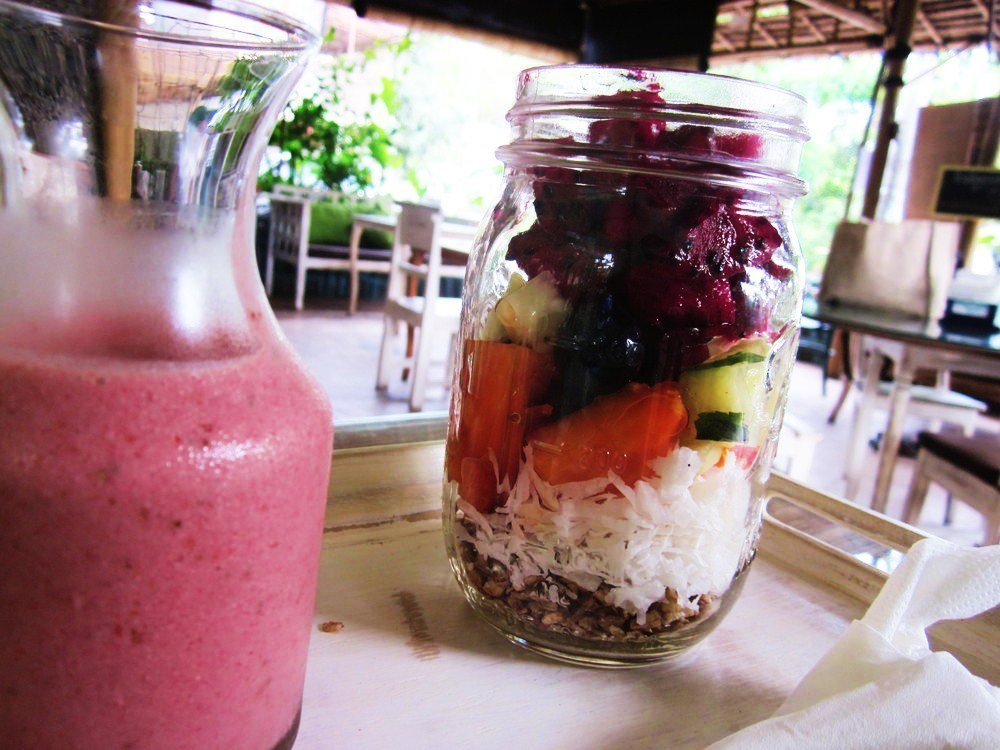 The best way to find the most fabulous raw vegan restaurant in Bali is: by accident.

I need to extend my Indonesian visa, and rather than dealing with the roll of the dice bureaucracy in Denpasar, I’m told to go see Elizabeth.  She will do it all for me, no problem. And she operates out of what looks like a flop house in back of a cafe called Alchemy.  So while my intention was to find Elizabeth, I found myself walking through a little slice of raw vegan heaven, in Ubud, Bali, of all unlikely places.

First off, I am neither a vegan nor a raw foodist, but I appreciate both when done well.  And Alchemy does it beautifully.  I had an iced latte, which was excellent cold brewed coffee with ice and cashew nut milk.  I swear I did not even miss the dairy, it’s that good.

Since then, I’ve been back for smoothies, tonics, the terrific breakfast bar with the best raw vegan yogurt I’ve ever had.  They also have an amazing chocolate and confectionery bar you won’t want to miss.

At lunch and dinner there is a truly abundant salad bar, and they source most of their produce from their own organic farm.  The salads are enormous, but if you have room after, go for one of their home made ice creams.

The atmosphere is very, well…raw vegan.  Some intersection of Berkeley and Haight Street and Dharamsala, transported to a lush tropical island.  For example, a young, impossibly tanned shirtless guy juggling red balls stopped to pop one of the raw chocolates into his mouth and told his lunch companions the following, in all seriousness:

“It’s a good idea to stand against a wall when you eat these chocolates.  There is a force in them that blows you backward, and you find yourself being pinned against the wall. That’s the love, blowing you backward.”

And there you have it.

Read this interview with Chef and owner, Shanti Allen.