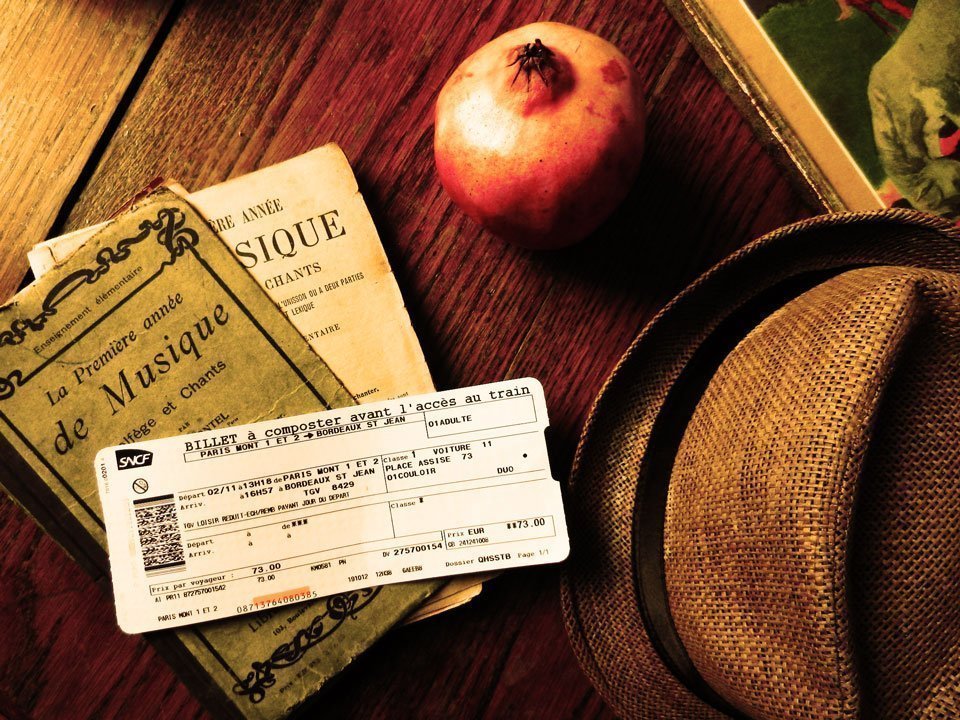 I leave Paris today. I feel anxious, tense, as though I’m leaving some business unfinished, though I can’t say what business, exactly. I pace a bit, leave my packing to the last minute.

The sky is grey, and rain threatens. It’s brooding weather. I ask David if he will be happy to have the house to himself again, and he only says that it will be quiet without me.

Normally I feel jubilant when it is time to leave. Leaving is like being born into something new all over again. But not this time. I’ve been to Paris a million times, but somehow I feel like I’ll never see it again.

David makes me coffee, and we stand across from each other at the partition that separates the kitchen from the dining room, as though we are at a bar. It’s always funny to me that we do this. Why not sit? But it actually feels like we are somewhere else when we stand here.

My bags are heavy, bulky, and packed, finally. David appears in the doorway to my bedroom, and flashing that smile—the one that feels like sun on warm earth—he says he is going out to get bread, and asks if I want some, as though he were offering me something illicit, forbidden. Yes, I say. For once, without hesitation. Damn the gluten. Does bread in France even have gluten in it? At this moment I’m willing to believe it does not.

David leaves for the boulangerie, and I go and stare out the window at the sky, at the street, both seemingly the same dirty grey.

I decide to rearrange my luggage, and when I am done, David is back and has packed me lunch: a sandwich and a surprise. He hands it over with laughter in his eyes (what color are they, blue-hazel, green-grey?). For the First Class Passenger, he teases.

It’s time to go. No more pacing. No turning back. It’s Bordeaux now, and whatever was unfinished in Paris will stay that way.

David puts on his blue wool coat and walks me to the bus stop, waits with me, holding one of my large bags. I tell him to put it down on the bench, but he says, it rains. Not, it’s raining, but it rains…il pleut. These little Frenchisms are so charming. I wonder if the French ever find Englishisms charming, or if they just grate on the ears.

The bus is packed. David gets on with me for a moment, because I can’t manage my luggage at first. Then he steps down, smiling, somehow emitting some kind of light that takes the place of words that are not said. I kiss his cheek, he kisses mine. And then the bus swallows me into its swollen belly and swims through the streets of Paris, to Montparnasse station.

I struggle to get my luggage on the train, and am amazed that an able bodied man is standing behind me, watching. It would be so easy for him to help me, so easy to be a gentleman. But he is not a gentleman, he is a Voyeur. I feel him watching me intently as I first struggle to hoist my luggage onto the train, then to get both bags up onto the luggage racks. Cheap thrills for a man who was apparently raised in an orphanage.

I find my seat and open my lunch. It feels like a birthday present. David has packed me a sandwich of rillettes de porc and cornichons, chopped up inside. I love cornichons. I worry that I don’t have a napkin, then realize he’s wrapped it in two paper towels, folded like a napkin. I’m suddenly famished, remembering that I had strong coffee on an empty stomach.

After my sandwich (which is comprised of something like half a baguette), I take out the surprise. It is wrapped like a gift, carefully, to stay nice even after an hour bus ride, closed at the bottom with cellotape. A slice of fancy opera cake, layers of mocha cream and chocolate.

The seat next to mine is empty at first. Then an old man gets on and claims it. He’s unlike any Frenchman I’ve ever seen, riding the first class carriage in sweat pants and a dark khaki safari hat. He is mumbling, and trying to get his coat off in the isle, but can’t manage it. I notice the Voyeur is sitting across the isle from me, watching this old man struggle with his overcoat, being thrown this way and that by the swaying train. Again, doing nothing. Impotent.

I get up and help the man take his coat off. He is having a very hard time managing his valise, and I know he will not be able to hoist it into the overhead. So I let him sit down, put his coat in the overhead, then ask him if he would like me to do the same with his rather large valise. He is grateful, and I cast a look to the Voyeur just to see if he might take this opportunity to redeem himself, but he continues watching, and it’s all he can seem to do.

I try to make room in the overhead to accommodate this large valise, and am grateful when I lift it that it is more awkward than it is heavy. It’s snug, but it fits. I cast a look of disdain to the Voyeur and sit down. Show over.

The old man smells a bit musty and has dark age spots on his face. His eyes are blue, but used to be bluer; age has turned them milky. He turns to me and asks me if I’m English, and discloses with pride that he speaks English. He tells me next week, he will be ninety-one. I congratulate him on this accomplishment.

After a long nap, he wakes up, seemingly startled to find himself on a train. He looks at my Kindle and asks me what I’m reading. Before I have a chance to answer, he takes my Kindle and scans the page. Tudor kings, he says. I’m somewhat amazed, as scanning that single page would not have supplied enough information to make such a sure statement. Yet he is correct. I’m reading Wolf Hall: A Novel

, which won the Man Booker prize this year.

He talks to me about the War Of The Roses, about geography, names the second city of Argentina (Córdoba) for reasons that elude me, and tells me he speaks Spanish fluently. He tells me his right knee is weak, but his eyesight is excellent, and so he still drives. Indeed, he is getting off at Bordeaux and driving a further three hours to his home.

Then he initiates a strange, but oddly endearing exchange, in which he makes loud and realistic animal noises, and then names the animal: wild boar, chicken, rooster, sheep, horse. I’m uncertain if he is regressing to boyhood, or if he regards me, considerably less than half his age, as a child.  In any case, we are both laughing.  I wonder how long this will continue.  His enthusiastic horse whinnying gives way to questions about horses. Do I like to ride horses? Do women in California like to ride horses? He liked to ride horses, until he got too old.

We arrive at Bordeaux St. Jean and I help him get his coat on, and bring down his valise. He disappears into the crowd and the grey afternoon.

Winter beach walk on Drakes Beach -- you've got to

Off the beaten path and a gorgeous winter hike to

Egg coffee is amazing! Join me for a very short, d

It's a gorgeous sunny Christmas Day in Las Vegas.

Ready for a relaxing coffee break? Link is in my b