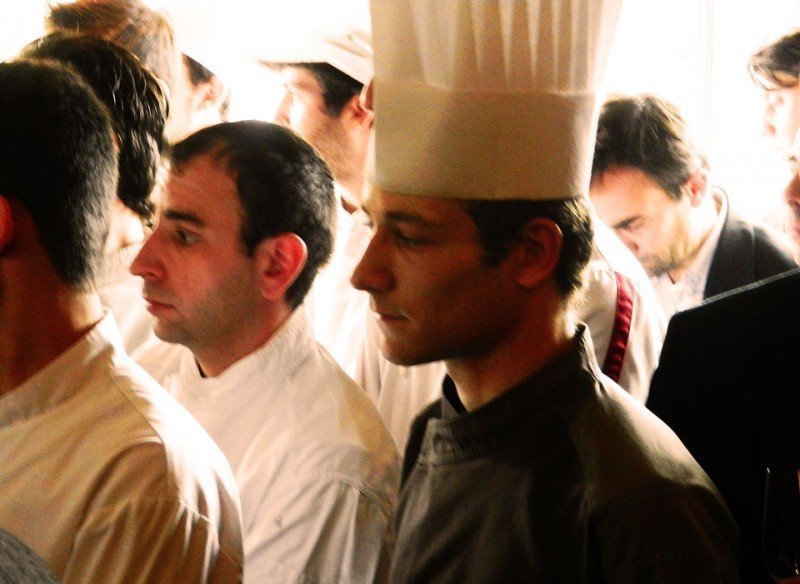 So many top toques in one place.  I unexpectedly find myself attending a gathering of the most influential food people in Aquitaine.

It’s 8:30 in the morning, and I arrive at Aurelien house as directed.  After a long while standing outside his door, his wife finally answers, in her pajamas.  I walk up the ancient, narrow stone staircase that leads to their great room, and Aurelien steps out of his darkened bedroom and into the weak morning light, still half asleep.  “Honey, where are my clothes?”

You can tell they are used to going from asleep to fully functioning in 15 minutes flat, because that is what happens. Aurelien and I go to the restaurant to prep for the cooking demo he will give to the top chefs of Aquitaine today.

He flips on his kitchen lights and fetches a plastic container from the fridge.  He’s still really groggy, and he tells me he doesn’t normally eat in the morning, but he has to taste his marinated calamari to make sure it is right.  I’m sure the calamari is delicious, but the idea of putting it in my mouth first thing in the morning after brushing my teeth is far from appealing. Aurelien says he has no choice, and frees one baby squid from the tangle and pops it in his mouth. He makes some grunting noises, which are hard to interpret.  Finally, he declares, “That’s damn good!  Who made that, did I make that?”

Now he’s awake, bouncing around his kitchen as usual, urging me to taste bits of this, shreds of that and a dollop of whatever.  Today I am tasting his house made lavash, grated épices des minorités, a tiny bit of cheesecake and a squeeze of horseradish cream from what looks like a big whip cream dispenser.

We pack everything in the car for the demo, and drive to the posh Caudelie spa and hotel in a nearby Bordeaux vineyard.  The whole place is garlanded for Christmas and smells beautiful. There is champagne everywhere, on tables and being passed around by waiters on trays.  The chefs are doing demos for each other: foie gras this way, foie gras that way, and for something a little different, coquilles St Jaques.  I’ve never seen so much foie gras in one place, raw on platters, breaded and deep fried, pan seared with various garnishes, and at the bottom of a little glass cup with hot pumpkin puree on top.

The chefs look serious.  Some wear black or white jackets, some are in civilian clothes, everyone looks smooth. The ladies are variously slinky, properly attired in black and wearing undetectable undergarments beneath their revealingly clingy dresses.

After the demos, the awards are handed out.  Then the schmoozing starts in earnest.  Hands are being pressed, cheeks kissed, business cards handed around.  Salesmen (the best dressed salesmen in the world, perhaps) are there with folders bearing images of foie gras, Iberico ham, smoked salmon, exclusive chocolate.  They are not going to let the opportunity to talk to so many top chefs in a single day pass them by.

A million sweets are passed around, and stronger drinks, too.  After around 5 hours, thousands of calories and plenty of booze, people are looking a little softer around the edges. But they never lose their cool.  They are French chefs, after all!  The press is there, soliciting.  The camera crews are swarming from this end to that, one taking stills while the other shoots video, back and forth.

The French take forever to say goodbye.  It’s not classy to rush anything.  So there is hand shaking, more kissing, more comments, drifting from one person to the next.  I’m tasked by Serena, his wife, with getting Aurelien to the car, which is not as easy as it sounds. Saying goodbye takes a full hour.

We’re finally back in the car and heading home, elated, relieved, tired. Aurelien breaks out singing; his wife, the sober one, drives.  He won an award today, which came with a nice plaque and a very large ceramic goose. He insists I keep the goose, as a souvenir.  I explain that I have no room in my luggage, but I’m honored, nonetheless.