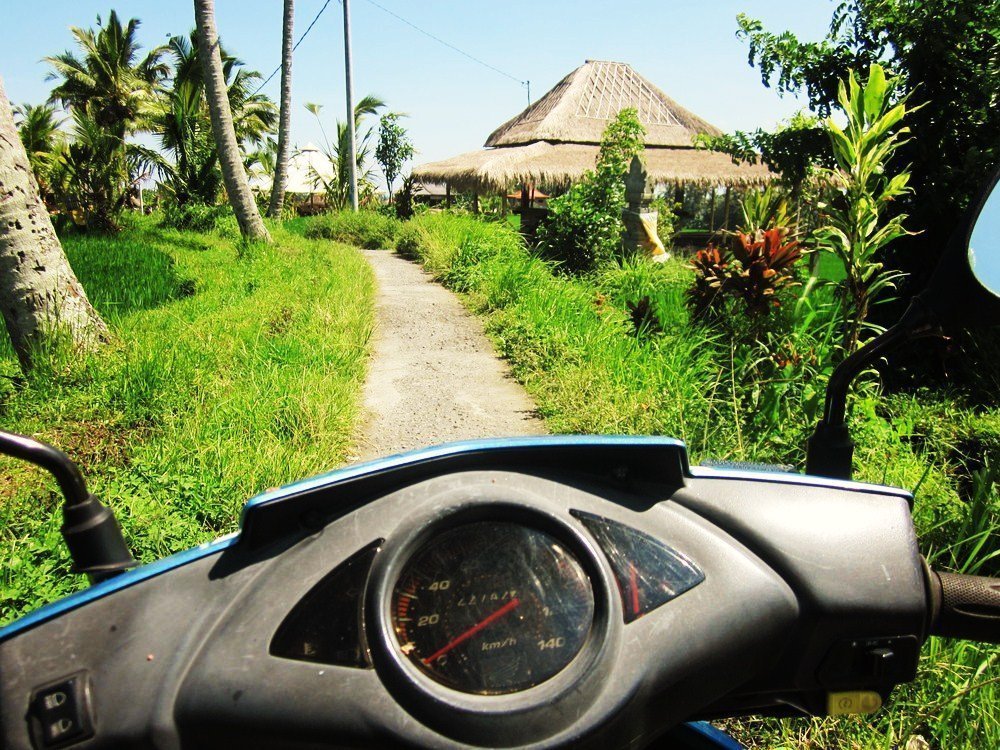 Riding a scooter in Ubud is a harrowing experience

First of all, it’s like riding with no shoes on. I’m in flip flops like everyone else, and you may not grasp what that means…but those of you who ride will get it.  If you are used to riding with protective gear on, riding with flip flops and an amusement park bumper car helmet (the helmet that comes with the scooter rental is ridiculous) feels like courting disaster.

My ride into the center of Ubud takes me on a potholed gravel road, then piles of sand, then dirt. Finally I get to an actual paved road, which winds around terraced rices paddies, past a waterfall, over a river gorge, through traditional village neighborhoods with dogs, cats, chickens  and children pfaffing about unpredictably. Suddenly, massive ornate temples appear out of nowhere, and then the road becomes vertical,  winding back and forth in a series of deadly switchbacks with sheer ditches or worse on either side.

Officially, people drive on the left side, but anything goes, so often you are faced with cars and scooters bearing down on you in your lane. On one way streets, people still drive both ways, even though there is only one lane. This is my daily drive to and from town.

I congratulated myself heartily for finding the laundress, for finally using the left turn signal instead of hitting the horn, which feels more like where the turn signal should be. I then got lost trying to find a petrol station. I finally found my way back to the main road home, but it was rush hour. I had planned to avoid driving during rush hour, but there I was, it just had to be managed.

I was almost hit by a giant van (as in, it actually touched my body) and drove the main strip in a crowd of scooters and cars just inches from me in each direction. Bugs kept flying in my eyes, and my visor was so scratched up that I couldn’t put it down and still see. I definitely recommend riding goggles. I bought a pair for around $30 and they have interchangeable lenses for day or night riding.

Once I got to the turnoff from the main road, I had that steep-crazy, yet beautiful drive back to my house in the rice fields, and there wasn’t much traffic. Though it’s still heart stopping to be driving up an incredibly steep hill doing switchbacks and turn a corner to find a van is coming downhill in your lane. But all is well. I made it home an hour before the rain started. I cannot imagine driving that steep switchback ravine in the rain. My brakes are not the best as it is, and that would just be a disaster. I endeavor to not ride in the rain, though sometimes you just get caught in it.

I noticed that drivers entering traffic from side alleys or driveways don’t look both ways, or even look at all, before entering the flow of vehicles. When I asked a local family about this, they informed me that the person performed a ritual to clear their karma. With squeaky clean karma, they had no need to use caution when entering the street. How can you argue with that?

If you are considering renting a scooter in Indonesia, be aware that, even though it looks completely lawless on the roads, there are regulations that cover just about every aspect of driving. Foreigners need an international driving license that specifically permits them to drive a motorbike. If you have that explicit designation on your home country license, it should be transferred to the international driving license. Everyone is required to wear a proper helmet, footwear and a shirt!  Men who ride shirtless (I don’t think this happens much with the ladies) can and sometimes do get pulled over and fined.

Obviously, these rules are not uniformly or even regularly enforced. You will see a helmetless family of four in flip flops riding about with their shopping tucked here and there.  Today I drove behind a local: he was scootering in flip flops, a sarong, without a helmet, talking on his mobile and smoking!  But if the police are in the mood, they can pull you over for these infractions . So be careful out there!